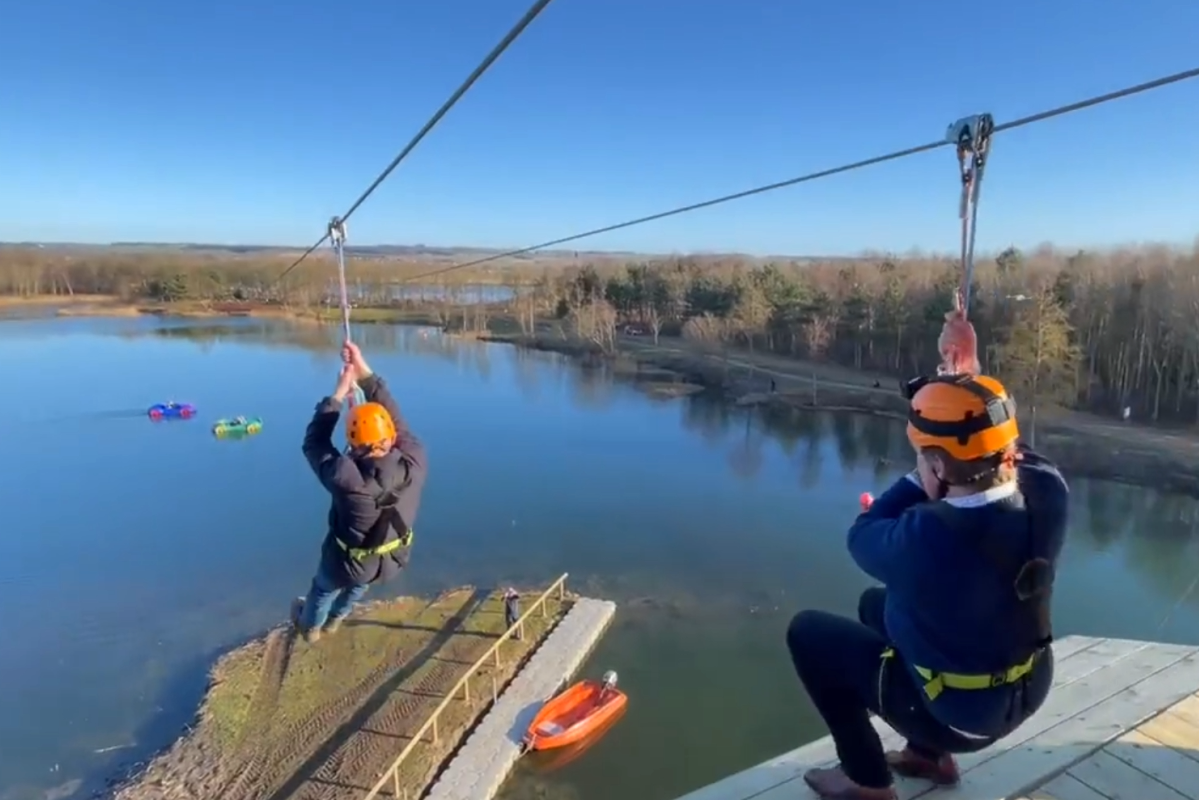 The latest addition to North Yorkshire Water Park has been launched today with the official opening of a new dual zip line over the lakes at the Wykeham attraction.

The 250m zip line is the latest feature to be added as part of a seven figure investment in the site over the last year.

Today, Sir Robert Goodwill, MP for Scarborough & Whitby officially opened the zipline, taking to the skies with Lord Downe, owner of Dawnay Estates, along with students from Scarborough College.

The new attraction will officially open to the public on Saturday 19th February, meaning that the zipline will be open in time for the February half-term break.

Consisting of a 13-metre-high tower with two climbing walls, and two 250m long ziplines, thrill seekers can take a breath-taking descent across the lakes on the zip wire whilst taking in the views of North Yorkshire Water Park.

Lord Downe says the Zip line has been a long time in the planning and says he enjoyed taking the first run.

“This is another significant milestone for us at North Yorkshire Water Park, as we open our latest attraction.

“We have invested well over £1 million into the business over the past 12 months, and the zipline and climbing tower is a key part of our vision for the Park, which has enjoyed huge popularity particularly last summer since the major expansion of facilities.

“As well as the zipline and our new climbing walls, we have also recently announced the opening of our new ‘251 Events Room’, adding to our private functions and corporate offering. All activities will be bookable on their own, or as part of an event or party.”

Scarborough and Whitby MP Sir Robert Goodwill says he enjoyed the experience and hopes the investment will help attract more visitors to the Yorkshire Coast.

Operation's Director at the Waterpark - James Whitehead - says the view from top of the ride is impressive and they are planning to add a few challenges to the ride.

As well as the new dual zip line the Water Park will be adding a climbing wall to their list of activities in the next few weeks. James says that should be open for the half term week.

The scale of the new zip line is phenomenal here at @TheNYWP ! Opens 18th February… pic.twitter.com/4ZKvKnIwuN