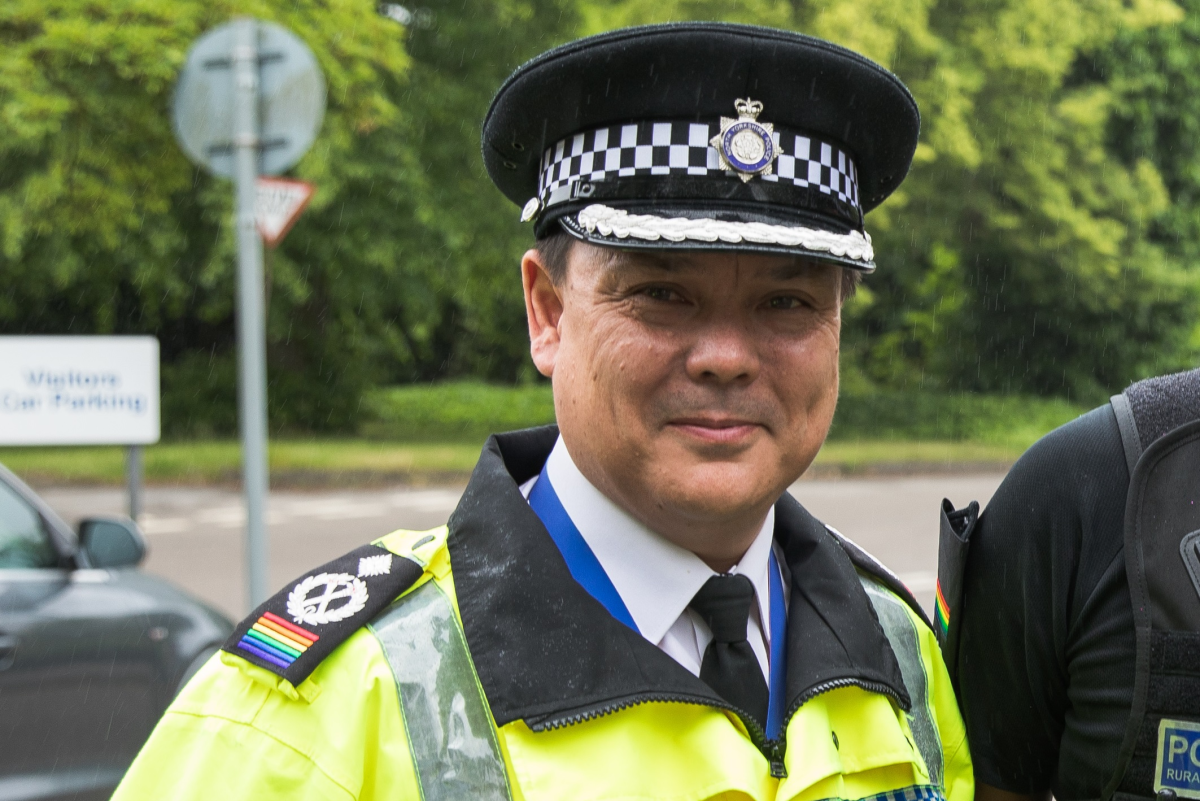 DCC Cain joined North Yorkshire Police in 2001 following a 13-year career in the RAF. As a passionate advocate of positive action, he has led North Yorkshire Police’s drive to become representative of its communities, ensuring everyone, no matter what their background, starts from a level playing field. He was also the National Police Chiefs’ Council’s lead for Workforce Representation and Diversity.

He was recently honoured by the Blossom Awards – an organisation that recognises the contributions of British-Chinese nationals to the UK. He was presented with the Public Service Award and the Founder’s Award, both recognising his outstanding contribution to UK communities.

“Deciding to retire truly was the hardest decision of my career. Every time I am lucky enough to attest a new course of student officers, I wish I could swap places with them and start all over again. Policing really does get in your blood.

“I started my career in Scarborough and have been lucky enough to hold several exciting and fulfilling roles across the force. All of which have been made more memorable because of the colleagues and friends I got to know along the way.

“I am very proud to have policed the county where I grew up and to be part of what I consider to be, the best family force in the UK. We are a force that punches above its weight nationally and I have seen us grow to be the first Home Office force in the country to be representative of our communities - building an inclusive service where everyone can be their true best selves, every day.

“There have been several challenges during my career, the murder of four people by Mark Hobson, significant flooding, austerity and of course Covid19. But nothing has been as testing as when we lose a colleague, and 2021 was a particularly devastating year for us with the loss of a number of serving colleagues. Their families will always remain part of North Yorkshire Police and we will always endeavour to support and be there for each other.

“Whilst there is still much work for us to do, I can see that the investments we continue to make in our workforce, technology and collaboration with our Fire and Rescue Service colleagues will ensure we are ready to meet the challenges ahead.

“North Yorkshire Police is on the way to becoming a national leading force for prevention and intervention work that will mean our communities will continue to work, live and visit the safest county in England and Wales. This can only be achieved because of the great team that I have been very privileged to be a part of.

“My thanks go to everyone at North Yorkshire Police - thank you for everything you each do every day. The public of North Yorkshire are in very safe hands and I will be proud to say I played my small part alongside you."

“I have been honoured to have Phil as a member of my chief officer team for the past four years and am forever grateful for his support, insight and contribution to policing North Yorkshire.

"He can retire in the knowledge that he has made a huge difference to the lives of many people across North Yorkshire and that his contribution to public life has ensured we live in one of the safest places in the country. We will miss him but send our very best wishes for a well-deserved retirement.”

“Phil has been an outstanding public servant for the people of North Yorkshire and York and I am truly grateful to him for his commitment to protecting where we live.

“His career shows that dedication and commitment to the people of this area, the officers and staff within North Yorkshire Police and the breaking of glass ceilings to ensure we have a force that reflects us all.

“He should be hugely proud of everything he has achieved, he will be much missed and I wish him well for his retirement.”

Phil started his police career as a uniformed constable in Scarborough, followed by a variety of roles as both constable and sergeant in response, intelligence and custody teams.

In 2009 he was promoted to Inspector and served in York.

In 2011 he was promoted to Chief Inspector and served in the Force Control Room as a Silver Commander.

Phil was appointed Temporary Assistant Chief Constable in February 2017, a role that became permanent in 2018.

Following a national recruitment process, Phil was appointed to the position of Deputy Chief Constable in September 2018.

He is a qualified Public Order, Firearms and Civil Contingencies Commander. 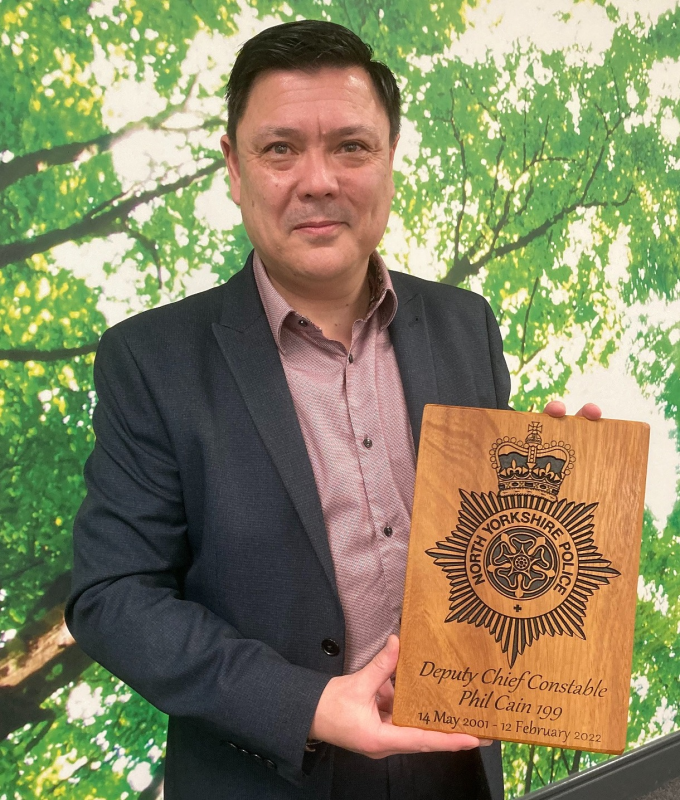 In 2019 Phil wrote a blog about positive action

My Story: Deputy Chief Constable Phil Cain – the half-Chinese council estate kid who didn’t even know what a-levels were

"Glass ceilings and falling between the cracks” - my personal journey

I consider myself very privileged to serve as the Deputy Chief Constable of North Yorkshire Police and, as far as I know, I was the first black and minority ethnic person to hold that position.

I have got here thanks to people who have helped me at each stage of my life. A real example of positive action in action.

I am half Chinese, and for some I don’t count as being black enough to represent them, and for others I have only got where I am because of my Chinese heritage and not because I was the best person for the job. Although these views are from a minority, they still exist and why I sometimes feel like I fall between the cracks!

I am proud of my background now, but that was not always the case.

As a young boy who only spoke Cantonese until I was three or four years old, I tried to hide the fact that my mother was Chinese, and I didn’t even want to eat Chinese food. This was because I used to hate the comments that came with my heritage – being called ‘Chinky’ or having someone pull their eyes into a narrow shape and sing “Ying-tong-China-man”.

At the same time I loved my childhood and still have many great friends from those days, and thankfully the negative experiences were in the minority compared to the fond memories I have of growing up in North Yorkshire.

When I joined North Yorkshire Police I didn’t declare my true ethnicity because I thought it might affect my application. In fact, at that time my ethnicity would have been recorded as mixed white/other. So even on an official form, I would still have fallen between the cracks. Now I realise how wrong I was, but I am sure there will be those out there who will understand why I did this.

I come from a single parent family, with a mother who doesn’t read or write English. I was born in Germany, lived in Malaysia and came to live in the UK when I was around four years old. After my father left us, and until my sister was older, I was the only person in my family who could read or write English.

We lived in local authority housing in Colburn near Catterick. I didn’t know it then, but I would have been described as coming from a challenging and under-privileged background. Apparently, according to some, “kids from my background don’t do very well…”

As I grew up, my family were fortunate to receive the support of some fantastic public services in North Yorkshire. I would not be where I am today without the support and guidance of a great many people in my life – both personal and professional – some of whom I still work with.

At age seven it was my job to fill in the council house applications and benefit forms – not something I would wish on any child. When my mum was in hospital, my sister and I were fostered by Kath and Eric, again through the local authority, and I also had the benefit of free school meals. It is because of this care that I received, that I am determined to work with our great public sector agencies in North Yorkshire to play our part in ensuring other children can have the same level of support that my sister and I received.

I have a passion for ensuring North Yorkshire Police is truly a public service for all, and that we are an inclusive organisation that promotes equity amongst our workforce.

To do this we must embrace and value our differences and not hide them away like I did at the beginning.

Many within our minority communities look to their police officers as role models for their younger generation and we shouldn’t shy away from that responsibility.

Creating the same starting line for everyone

It matters not which box you tick, but that with the right support and determination you have every chance to succeed. That is why North Yorkshire Police will ensure that difference is recognised and we will develop people so they get to the same starting line as everyone else, before they run their own fair race.

It is funny how some things remain in your memory over time. I recall having a meeting with a schools’ career advisor. All I wanted to be was a police officer. I was told to forget that because I was never going to be tall enough! Well thank goodness they changed that rule, because I may not be the tallest, but here I am as the Deputy Chief Constable in the county where I grew up.

I didn’t know it at the time, but just because of my background, a glass ceiling existed. If I had, I think I am just so stubborn that I would have been determined to break through it anyway.

I didn’t have conversations about doing A-levels and the pathway to university  – nobody in my family had ever been to university. I suppose it was assumed that because of my background, I just wouldn’t do such things. It saddens me that even today that very same glass ceiling still affects some young people.

Determination, drive and hard work is important if you want to succeed, but whether you are from a disadvantaged background, a minority group, or face discrimination for being you, we will support you and get you to that equal starting line.

The support and guidance I received helped me to get to that starting line. The rest was up to me.

But after all this time I am proud of my heritage and teach it to my children. I go back to my old school every year to attend the students’ annual awards ceremony. I tell them I am from Colburn and that glass ceilings were meant to be broken.

I champion diversity and inclusion in the police service and I know that North Yorkshire Police is an amazing place to work if you want to come and be your best self every day and help to keep our communities safe.

So be proud of who you are, your heritage and differences. For far too long I wasn’t and I was wrong.

And remember – those ceilings are made to be broken!